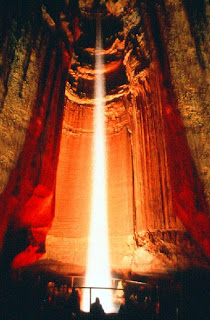 We have mentioned the reunion of Green Globe and Green Certification in an earlier post: http://blog.greenty.com/2008/11/green-globe-and-green-hotel.html
The dual certification program has just announced its first joint certified tourism attraction certification: Tennessee’s Ruby Falls. Ruby Falls is the US deepest commercial cave and largest underground waterfall open for public viewing. It has been named as a “Top 7 United States Natural Wonder” together with Yosemite, Niagara Falls, Grand Canyon and Sequoia National Forest.
More info at http://www.rubyfalls.com/
So how green is that ? Since 1928, when Ruby Falls recycled the limestone excavated from the cave to build the Ruby Falls building until today as they have been focusing on renewable energy, reductions in emissions, lowering waste and continuing land conservation.