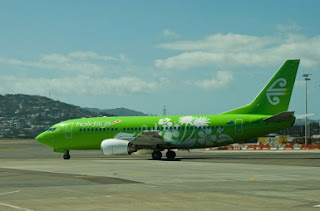 Another airline goes green : Air NZ is enabling passengers to buy carbon credits – and the fees go directly into projects like the Tararua wind farm on New Zealand’s north island.

More important, they plan to become the first airline in the world to test a biofuel made from the nut of an Indian plant, called jatropha. They’ll test it later this year and already plan to be using it on 50 percent of domestic flights by 2013.